Today my mother-in-law passed away after a long battle with cancer. I’ve never been very good at dealing with death, in fact I’m probably the worst at dealing with it when it comes to people. I’m very ‘meh, they’re dead, move on’. What I can’t stand is what it does to the living, I’ve seen grown men, men who I thought of as strong and stalwart collapse and fall apart at a funeral. I find it really unnerving, very matrix where my world has shifted and everyone has been shot into a state of misery.

This will be the first time I go to a funeral for someone that I actually cared about. When my step-father passed away a few years back I hopped on a plane to Vancouver to be with my junkie boyfriend instead. The boyfriend is a whole novel unto itself but the decision to turn tail worked very well for me. I didn’t want to deal with all those bereft people. As with funerals, I’m also fine when everyone else is in a state of panic, I get very orderly and proficient, almost cold. I think I would have made a good rescue worker (as long as there were no animals involved). For some reason people are … well just people to me and although I miss them when they are taken suddenly their death doesn’t cause me any severe anguish. Now the loss of my dog two years ago can still bring me to tears.

I’ve come to the conclusion that this reaction is two-fold, one it’s because animals have always given me so much more than people in general that I feel a deeper affection for them but worse, and I think this is a part of society today as a whole, we are inundated with violence and death by the constant onslaught of news stories, video games, movies that it becomes common place and an every day occurrence. So much so that we respond, ‘oh gee, that’s sad’ and then just turn around and pick up what we were doing as if a plant had died. Perhaps we are slightly more impacted if it is someone close to us, especially if they are taken suddenly and it is then we call into question our own existence. I mean really, what are we all here for?

Personally, I’m ecstatic that I’ve made it this far with 17,979 spins around the globe to date. Having said that I’m also big on quality of life. I hate this end-stage suffering that people have to endure nearing the end of an illness. We put down suffering animals for crissakes, why can’t people have the same option? Okay, I’ve got the DNR tattoo and everyone knows no extraordinary measures but what about the old Dr. Kavorkian plight and the right to euthanasia if I want? I think it’s friggin’ barbaric that in this day and age with all these provisions for people with needs that we can’t, as adults, have the right to take our life at some point with medical assistance without it being deemed illegal. WTF? Personally, if I came down with some terminal illness I would be hunting down the local heroin dealer faster than you could say ‘Bob’s your Uncle’ and stashing me a lethal dose for that fateful day when I knew I would have to make a choice before I couldn’t. I think it’s absolutely ludicrous that assisted suicide is a criminal offence, since when does anyone else have the right over my body? It’s right up there with reproductive rights if you ask me, my body, my decision.

As to the whole death thing. My dearest Maureen, it was a pleasure knowing you, I was very glad to have you in my life, albeit too briefly but I’m very glad that you are no longer suffering.
Fuck you cancer! 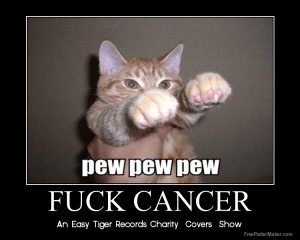